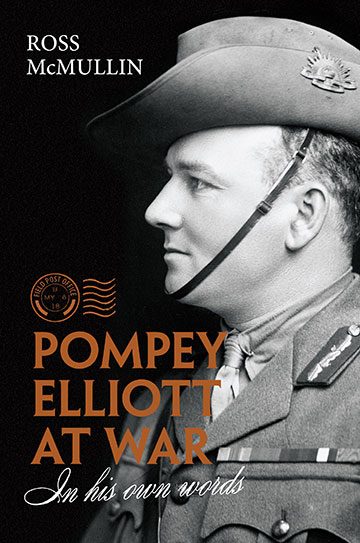 Ross’s new book is Pompey Elliott at War: In His Own Words.

Rather than a comprehensive, life-and-times biography like his previous book on Pompey, this new book is Pompey in World War I in his own words.

Ross has collected Pompey’s words from wherever he could find them — letters, diaries, orders, speeches, newspapers, battle reports, award recommendations, documents in his brigade’s diary, etc etc — and shaped excerpts into a sequence that reads like a narrative. Pompey provides extraordinary content for a book of this kind because again and again what he writes and says is so frank, forthright, emotional and controversial.

Many first-person accounts by Australians in World War I have been published, but this one is very different, for two main reasons — the way it’s been created, and its exceptionally vivid and candid content.

Read the Introduction
Read praise for the book

Images From The Book

Praise for Pompey Elliott at War: In His Own Words

McMullin’s 2002 biography, Pompey Elliott, won acclaim for its monumental research and literary quality. It is among a small group of books high in academic integrity yet accessible to most readers. I have spoken to nurses, tradesmen, truckies and university lecturers who read Pompey Elliott and enjoyed it. Pompey Elliott at War: In His Own Words is a timely new book that tackles the same “special” character but with a different aim … [It] will appeal to a host of readers — those new to Pompey as well as admirers of McMullin’s rightly celebrated oeuvre of Australian history and biography. This is an emotional as well as a social and military history, bounded by one man’s experience and penmanship. It is a timely and important book that tells us a great deal about the Australian achievement in 1918. McMullin’s selections from Elliott’s writing do not shy away from the tempestuous, even infuriating, side of Pompey’s nature. In His Own Words gives the reader a “warts and all” perspective on this big-hearted fighting man and loving husband and father.
— Lucas Jordan, Victorian Historical Journal

General “Pompey” Elliott was a famous Australian in 1918, half forgotten seventy years later, and is now a national military hero … Probably Elliott now stands just below General Sir John Monash in the honour roll of Australia’s military leaders … Elliott is often observant, like his skilled biographer Ross McMullin … [Pompey] received one slice of luck long after he was dead. He was found and brought back to life by an impressive historian.
— Geoffrey Blainey, Australian Book Review

Ross McMullin’s new book reveals the inner life of one of our most illustrious warriors … McMullin shapes his selection of Elliott’s correspondence, statements and speeches into a riveting narrative.
— Ross Fitzgerald, The Australian

Elliott was a prolific and colourful writer of letters, reports and diary entries. Ross McMullin has done a superb job in assembling these, in chronological order, to provide us with an insightful WWI narrative that provides a unique view of the war — the view of an officer who cared deeply about the men under his command, who thought analytically about the tactics employed, and who was not afraid to voice his opinions … Pompey Elliott’s correspondence is honest, revealing, informative, sometimes confronting, and invariably entertaining.
— John Gatfield, Reveille

I suspect that the Elliott letters would be unrivalled as a resource for a case study of an Australian marriage in early 20th century Australia. They convey deeply expressed longing, grief, anger and the rest. Separation and the real possibility of death can indeed prompt heartfelt frankness … and this triple-A alpha male, anything but the taciturn Aussie, put it all down on paper … some almost too personal to comfortably read … Elliott loved his men and their loyalty to comrades and unit colours, became distraught at their disfigurement and slaughter, and hated the fact that he couldn’t adequately protect them during the war.
— Michael Piggott, Honest History

McMullin’s work provides important textual links between the diary entries, family letters and correspondence. Sometimes short annotations, sometimes with more detail, the reader is always aware of significant people, their role and key events, which provides Pompey’s words in context. Published by Scribe, this book is superbly written, thoroughly researched and beautifully compiled. Complete with detailed index, photos and maps, it more than does justice to Australia’s best-known fighting general. While Pompey’s place in our military and civic history is once again rightfully acknowledged, it is through this exceptional book that we are reminded of a man who not just led, but cared deeply.
— Gavin Briggs, Listening Post

This [is a] fascinating book … Through all the horrors of war Pompey remains a sensitive soul … We see him more as a cultured, educated man who happens to be a general.
— Troy Lennon, Daily Telegraph

Pompey was eccentric, volatile, outspoken, brazen and his men loved him … but his reputation as one of Australia’s finest generals had been in decline until Ross McMullin rescued him.
— Dianne Dempsey, Bendigo Weekly

[It] sometimes seems as though you were there with the General himself.
— Kevan Sanderson, RUSI Victoria